Advice for anonymous pieces of writing

So instead of making multiple threads for advice about a specific scene or piece of writing in any format whether that’s a book, poem, letter, etc, it’d be more handy to just have a main thread for this so we can all come together and get advice.

Here you can insert your writing anonymously (or just insert here) a piece of your writing including the backstory or valuable information so people can read it and give advice, tips, and/or answer any questions you want answered about your specific piece of writing in a form here and I will post it on this thread for others to give feedback: 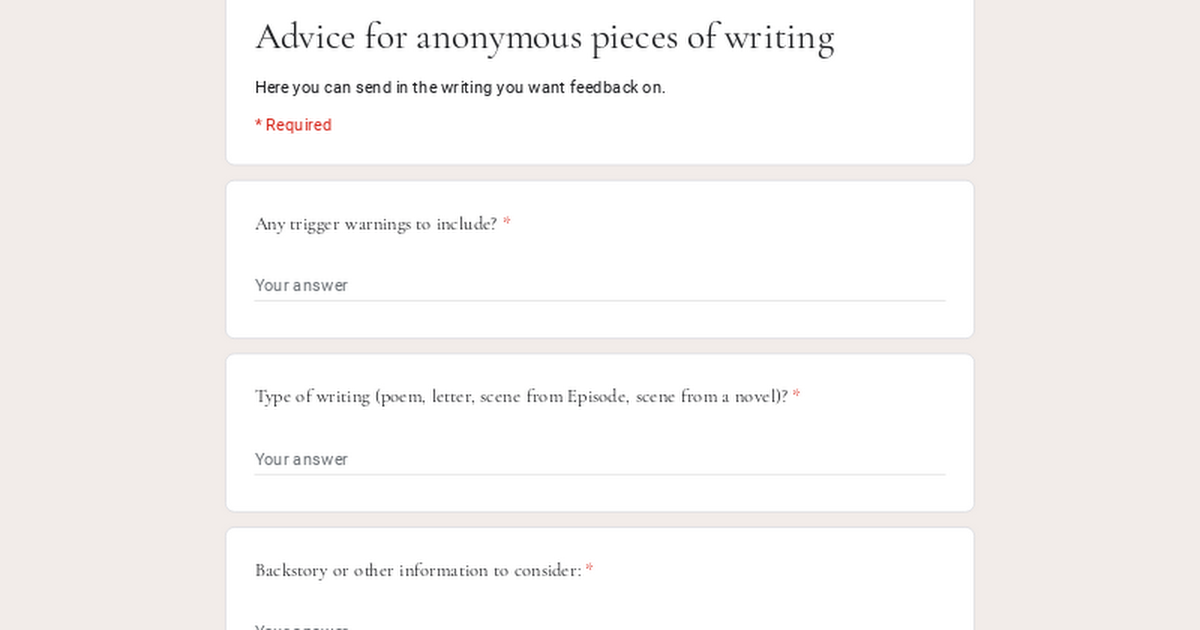 Advice for anonymous pieces of writing

Here you can send in the writing you want feedback on.

I think this can include writing excerpts for blogs, essays, as well as reports. Just state what you want feedback on.

Expect criticism and do not send in excerpts if you only want positive compliments. While you might get it, most likely will you get criticism that isn’t meant to hurt your feelings, but might appear blunt enough to come off as threatening. (That is if people even use this thread for it’s intended use.) Do not take it negatively, and try to just focus on what is being said, not how it’s worded or stated. If you focus on how they said it and make it clear in a post, that is tone policing and violates the forum guides. I recommend you keep it to yourself and find a way to deal with it without breaking any rules or just refrain from submitting excerpts in general.

I think this is different to @Eleanor_W-15’s anonymous writing advice because hers is for fictional writing in general, but this is focusing on getting advice and feedback from excerpts of your writing that you submit.

Yeah I already saw how this might seem like a multiple thread but I made sure to include that note to set the difference between the two.

What they want feedback on:

Anything except grammar/spelling. I wanna know what flaws I have included about the characters and how I wrote it in general. Opinions on the character would be helpful. Don’t be afraid to be critical! I know it’s bad lol. I’m just genuinely curious to what other people think!

I’ll tag @Writers again since I’m now posting submissions I got! Feedback would be appreciated by the people who submit.

The feedback they are looking for quoted from their exact response:

Just let me know what you think! I’m proud of it and want to share.

Hey @WritingWithStars I’ve skimmed through some of your writing to make sure you at least get some feedback.

As soon as I started to read I quickly noticed your overuse of words.

I look up at the sky, the clouds huge in the light blue sky. The clouds are moving, constantly, slowly, moving across the sky.

Typically it’s better to reword sentences or use other words to describe the thing you’re still referring to in this case.

Also there is a lot of use of capital letters so it looks pretty off, at least in MLA/novel format.
I’m tired right now so if I come back to this I’ll try and see what other tips I can give you.

Also I think your idea of a story seems pretty interesting. Are you making this a novel?

Yeah was going to but it just had so many flaws that I couldn’t continue the story.

You could always restart it.

@phlegmatic are you still doing this?

Yes I am. Did you send in a piece or something? I checked a few days ago and had no submissions so I can’t do anything with this thread until I get some.

(In the summary below, all information was provided by the submission I received.

The feedback they are looking for quoted from their exact response:

The flaws I have included about the characters and how I wrote it in general. Opinions on both characters would be quite helpful. And I I know it’s really bad- Anyhow, I want to know what you guys think.

Please, @Writers, if you could have a look over this chapter written and hand out some thoughts, that would be helpful, especially to the writer. :))

@Writers I would really appreciate the feedback please.

Once, I finish what I’m doing I will respond.