Blood of Empires || Sign-Ups and Chat 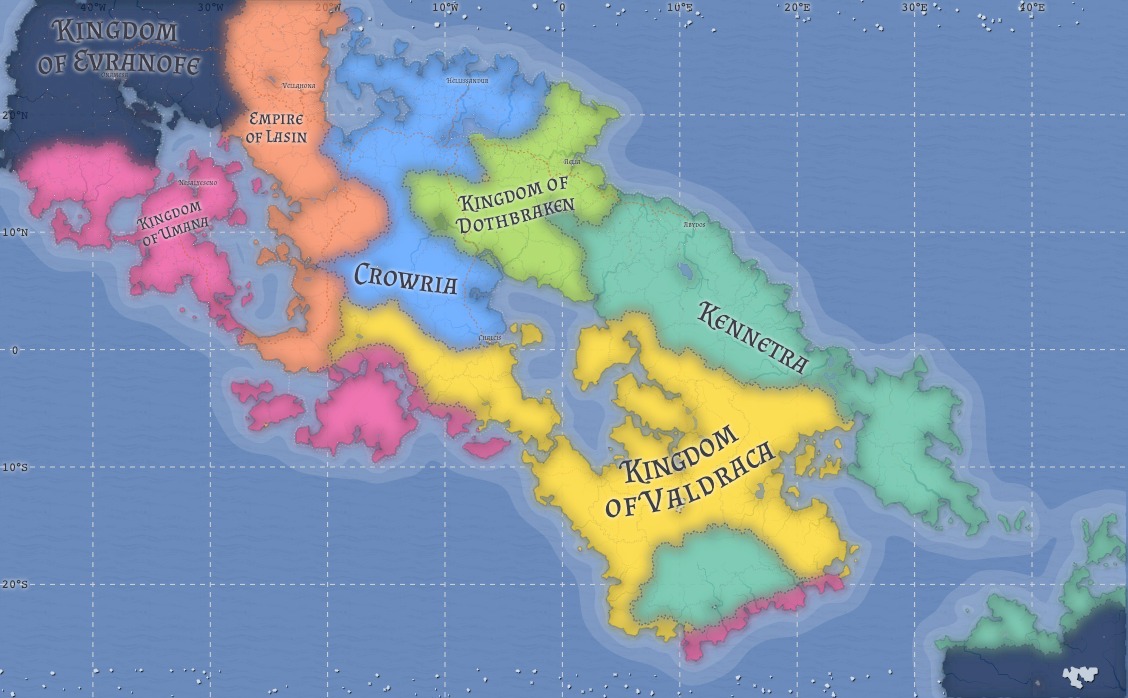 On the continent of Kentara there resides 7 kingdoms – of course that wasn’t always the case. There used to be near a hundred tiny kingdoms until the need for manifest destiny spurred itself in Kentara. Eventually, we ended up with 7 kingdoms that seem to be at a standstill – countless times they’ve attempted to conquer one another through deceit, poison, lies, marriage and more but all it succeeded in doing was cause bloodshed.

3 years ago the Queen of Unama called for a ceasefire and managed to make all the kingdoms come to an agreement to keep the peace and care for their own kingdoms and empires.

To celebrate the 3rd year, the country of Unama has come together with Crowria to host a celebration in the heart of Crowria. Will the kingdoms and empires be celebrating another happy year and many more of peace or will they succumb to a time of bloodlust and conquering once more?

Purpose of the RP

You want to either avoid being taken over or take over all the kingdoms. Which can be done in many and various ways – but it has to make sense. Not, “And the surprise attack startled everyone and Dothbraken now rules the world.”

More drama and such can and will be vital and add interest to the role-play, love triangles, broken promises, and gasp assasination are all amazing things for this RP. *

Even other noble houses vying for the crown would be a great thing to add to the RP.

All of the Kingdoms have advantages, drawbacks and stats. One kingdom may be weak in army but attacking it without proper political preperations may result in the largest empire setting your kingdom afire.

Advantages should be in the forefront of your mind as you plan your attacks with me via DM. If your country’s army is very weak you might want to consider an alliance, perhaps offering your child to a royal family with a larger army or one with high status in another kingdom? No one wants to kill family, isn’t that right

Battles, Conquering and such take time and have a lot of factors and no matter who’s bigger there will be losses on both sides. Since this does take time, timeskips will be a frequent occurence in the roleplay.

And another thing, if you’ve conquered a kingdom, who’s to say they won’t rebel or declare independence under a new leader once more?

This is partly SG

There will be SG parts of this roleplay. Includes but not limited to battles, declarations of war, weather, sickness, events etc. If you want to murder someone or arrange a marriage with someone you would DM me and I’d make an SG where your character offers their child’s hand in marriage.

If you declare war or attempt to try to begin to a takeover you will need to DM me and I’ll SG the battles and declarations, although I’ll be working with you to let you know your military stats and for you to tell me your strategies.

You must read through signups and rules

Reserve a daughter from Salutem
Reserve a male servant from Arun

the house names lowkey remind me of the Survivor tribe names-

They each mean something about the countries values. although I may have mispelled Arum

Reserve a daughter from Salutem

House of Health.
Unama is known for it’s medical advances

Thanks for reserving a parent! I feared I’d have to make a bunch of NPCs or something

Aha of course I want to take over the world so

Also, you have a due date yet?

I’m thinking sometimes around or before Mid-August…definitely at least two weeks from now though.

Ooh, sweet, looks like I’m not overbooking myself …yet

Aaa this’ll be so cool! As long as we can come up with a better ending…

House Fiducia. The slides to the noble houses and their names are linked in the OP

AHA! I have found you!
I was looking for so long lol-

I’ll reserve more characters as well, but here’s a couple to start me off

Is there an age minimum?

We both have an addiction to making characters.